Festival of the Four Winds Patch Notes on GuildWars2

Festival of the Four Winds 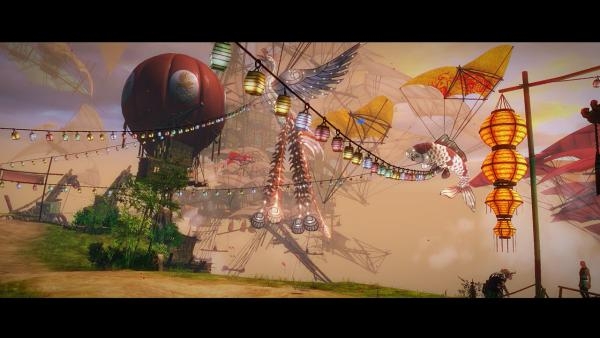 Festival of the Four Winds

Scarlet Briar’s attack devastated Lion’sArch, but Tyria’s best and brightest are rallying to support the stricken city.The Zephyrites and Queen Jennah will both offer their finest festivalamusements to boost morale and offer support. Visit Labyrinthine Cliffs andexperience the rush of Aspect movement skills, take part in the Sanctum Sprint,or enjoy one of the brand-new events; then take a hot-air balloon to Divinity’sReach and enjoy the reopened Crown Pavilion, including a new version of theQueen’s Gauntlet, the Boss Blitz.

Join Braham, Rox, Marjory, Kasmeer, Taimi,and Scruffy as they enjoy the festivities and usher in the return of Lion’sArch services!

The Zephyrites have returned toLabyrinthine Cliffs in their large-sailed flying ships to support Lion’s Archin its time of need. Although Lion’s Arch suffered a devastating blow as aresult of Scarlet’s nefarious plans, Captain Ellen Kiel of the Captain’sCouncil is grateful to see the Zephyrites return with their generous offer ofmaterials and moral support. And to help reinvigorate trade and provide somejoy to its citizens, the Zephyrite Master of Peace and Queen Jennah of Krytaare hosting a festival to honor Lion’s Arch. Join Kiel and the adventuringgroup of Rox, Braham, Marjory, Kasmeer, and Taimi in Lion’s Arch at the ClawIsland Portage Waypoint to meet the Zephyrite leader and kick off the start ofthe festival.

Players can travel to Labyrinthine Cliffsto partake in all of the fun and excitement of the festival by speaking to thetransport facilitator in Lion’s Arch, or by hopping in a hot-air balloon inDivinity’s Reach. Once there, players will find the exhilarating Aspectmovement skills perfected by the Zephyrites, enabling them to dash, leap, andtether to all corners of the map.

The Zephyrites and the strange denizens ofthe bazaar have not been idle since the last time the Zephyr Sanctum wasdocked. Players can participate in an all-new scavenger hunt for sky crystals,with new, harder-to-access locations.

Two of the locals, Barkeep Ixcic and TraderOwens, have also put together two brand-new events designed to delight theentire bazaar!

Players can participate in the SanctumSprint, a competitive race of up to 12 participants, where they’ll need to useWind, Sun, and Lightning movement skills to complete the course.

The Crown Pavilion in the human city of Divinity’s Reach has onceagain opened its gates. Join the golem Heal-o-Tron in assisting the city of Lion’s Arch. Donateenough money and he’ll kick off the all-new Boss Blitz in the trenches of thePavilion. The champions are back and have learned a whole new set of skills. Thefaster players can slay the mighty champions, the greater the rewards. Butbeware! The champions are sharing the secrets of their training with eachother. As each one is defeated, others increase their power!

Enter the Queen’s Gauntlet to battle mightyrepresentations of humanity’s most vicious enemies.