For all GuildWars2 heroes, Towers, like keeps, are surrounded by walls and have asingle gate (usually). The difference in strategy is actually rather big, sincetowers are very simple. First, you’ll need about ten players if the towerhasn’t been upgraded, more if it has (fewer numbers can do it, although slowerand will require teamwork). Next, you’ll need a flame ram, one will suffice.Then it’s a simple step by step process. 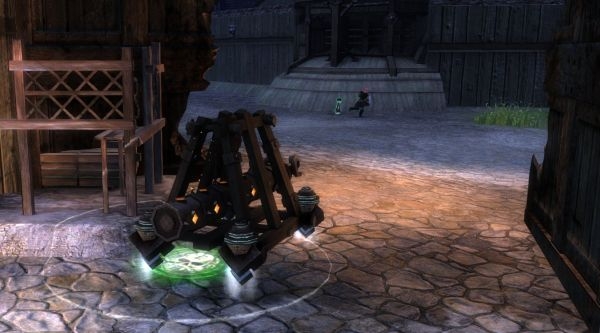 First, take out any oil above the gate.That’s the biggest priority. Next, secure the gate and the entrance into thetower. You do not want any reinforcements getting inside, nor do you want anysupply caravans making it into the tower to bring supplies to repair the walls/ gate. After that, have someone place a flame ram at the gate, have the nearbyplayers supply the ram and then bust the gate down. Alternatively, you canbuild a catapult away from the gate (far enough out not to be sniped from thewalls) and use it to bring the gate down or switch to the walls if the gatedoesn’t seem doable.

Siege weapons are nearly required totake down gates, a player will do about 50 damage to the gate, but a siegeweapon can do between 500 and 1000. Once a gate is down, a few players shouldhang back to keep either the defenders from rushing the tower or the otherworld from trying to gank the tower. A guardian can put up wards to stopmovement and general chokepoint defense tactics works great on the gate. Therest of everyone should rush to the Tower Lord, a raid boss, and take him down.

That’s pretty much it. A heavily defendedtower should be skipped, because if the world is defending a specific towerthen many, many other towers are lacking defense. Crossed swords do spawn onthe map indicating conflict as soon as combat begins around a tower, so beaware that reinforcements will come as soon as the siege begins.