WOW! RPers should read this: BDO GM vs its player

Seems this is all what happens: A BDO player named Kimochi offended the whole roleplay community. GM Rothaaz took matters into his own hands and suggested a way "redeem" himself through a 501-word Roleplay essay focused on the story of Kimochi instead of banning him directly. Thumbs up for this creative GM. :)

Surprisingly, Kimochi complied. Though the essay was removed from the roleplay forums of BDO official site, it still lives on through Reddit. Having fulfilled the requirement, Kimochi is not banned though the GM team will be watching.
The following includes the letter to Kimochi from the GM and Kimochi’s essay, Gm’s reply as well: 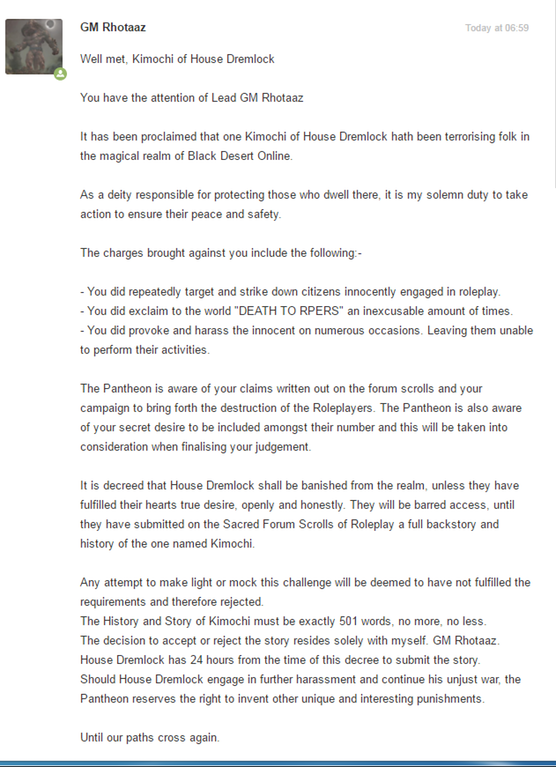 A warm summer breeze gently caressed Kimochi's exposed breasts as she lay tranquilly in a meadow nestled among Kamasilve's towering trees. Her chocolate silhouette a stark contrast to the lush green forest, accentuated further by her state of complete undress. It was an unusually warm day, and beads of sweat ran freely down her generous chest, passed her navel, pooling at her womanhood. Her thighs, massive by all regard, yet smooth and supple, were crossed in such a way as to baste her in her own perspiration. Her image a true manifestation of the elven fertility goddess to whom she pray.

Kimochi's lazy gaze drifted about from cloud, to her own luscious body, slowly falling into a dreamless slumber, enveloped by her own womanly scent. Peaceful, despite a slight but persistent, uncomfortable yearning deep within her loins. As she try to fall asleep she could feel the pressure building inside her. Gradually, more and more. So much so she was unable to ignore it any longer. Kimochi opened her eyes to see she was enshadowed now more closely by towering figures above her. These weren't the trees. Her serenity quickly replaced by chilling, disabling fear. Cyclopes. Drunk with lust having smelled the intoxicating fragrance of an elf in heat.

"Escape!" she thought to herself frantically. But it was too late. She counted them, seven, eight, nine... their numbers too many to determine at a glance. Her fear shifted to debilitating hopelessness in an instant upon realizing her fate was sealed. The largest of the cyclopes reached down gripping her waist with one giant, brutish hand. He lifted her off her feet. The cyclops accessed every inch of her naked body as if a beast preparing to devour her. Its gruesome eye lingered at her supple breasts, but then lowered. His insatiable gaze yielded for a moment, replaced with temporary confusion. Where Kimochi's womanhood should be, something additional was present. Tiny at this current moment due to her fear, but quite discernible nonetheless. The cyclops was furious at his discovery and dropped kimochi to the ground. Kimochi desperately tried to crawl away hoping to go unnoticed as the cyclopes roared amongst themselves, but she was suddenly dragged backwards and forced to a position giving full view to an exclusively feminine perspective.

Out of the corner of her eye Kimochi saw what appeared to be a troupe of traveling players on the road some ways away. They had stopped in shock and horror at the sight unfolding. She looked at them and with desperation mouthing "help me". But before she could glean a response, her consciousness was wracked with pain and she felt herself break inward.

After what seemed to be an eternity, Kimochi lie on her back, still atop the most recent cyclops. Her speech a repeating mess and mind broken, but her body which was once ruined by pain, had given way to the beginnings of laughter and even pleasure, as was evident by the attention of her more masculine side.

Despite the contentious nature, the Pantheon has acknowledged that the terms of the challenge have been met.

However, Kimochi of House Dremlock, we utter this warning. Ignore it at your peril!