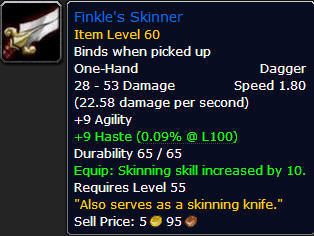 Why it's awesome: The +10 to skinning doesn't seem like much, but in vanilla that extra ten points was everything. Possessing this dagger meant you could skin bosses like The Beastand Onyxia. And you wanted to. The Beast could be skinned for Pristine Hide of the Beast, a very rare item and an ingredient in several epic recipes.
Skinning Onyxia gave you Scales of Onyxia, the crucial ingredient in the Onyxia Scale Cloak. Killing Nefarian in Blackwing Lair was impossible without those cloaks.

NO.14 Blackblade of Shahram（no longer available） 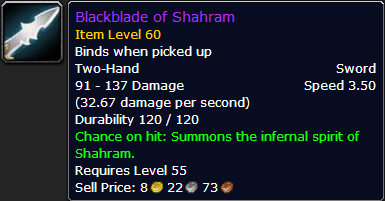 Why it's awesome: This sword summons the flamewaker Shahram on-hit. He casts one of the following spells: an AOE stun, an AOE slow, a Bloodlust effect, a groupheal with mana regen, a buff with +50 stats (huge in vanilla), and an AOE fire damage spell. With Titan's Grip, you can get two Shahrams out at once and two random spells. 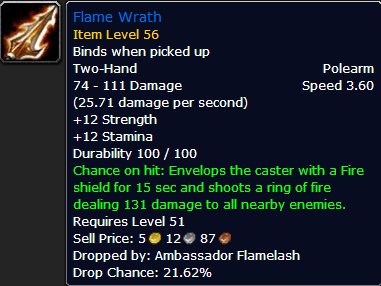 Why it's awesome: So much flame, so much wrath. This ilevel 56 polearm is perfect for guardian tanks. The proc is the key: Flame Wrath hits everything around you for AOE fire damage and then gives you a Thorns-type shield that strikes back for 10 fire damage. The prochas no internal cooldown, and can trigger multiple times on your own AOE abilities. The shield lasts 15 seconds, so it's up pretty much forever. The shield also grants you 30 fire resistance. On top of all that, the devil's pitchfork look of the model is very popular for transmogging.

NO. 12 Black Bow of the Betrayer 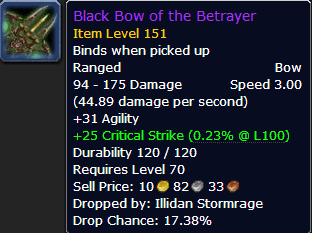 Why it's awesome: Mana was a big hassle for hunters pretty much the entire time they used mana. Items such as this and the earlier Black Grasp of the Destroyer were a godsend for OOM hunters. Also, because the on-hit mana proc was all but useless for other classes, hunters could finally say "hunter weapon" and their fellow raiders would believe it.
Needless to say, this bow has one of the most wicked-looking models in WoW. Between the model and the weapon's source, the Black Bow easily could have been a legendary.

NO. 11 The Unstoppable Force 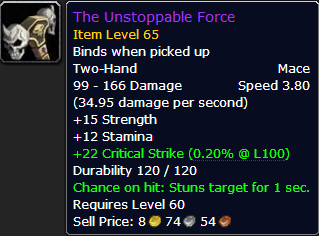 Why it's awesome: The Unstoppable Force originally had a knockback proc. It was the only knockback players had access to at the time. Two patches later, Blizzard changed the knockback to a stun. TUF was still a great endgame weapon, but it wasn't as fun when you couldn't knock players off that bridge near the Alliance base. The mace also has a very cool model: a large spiky boar's head.