NO. 5. Dark Edge of Insanity 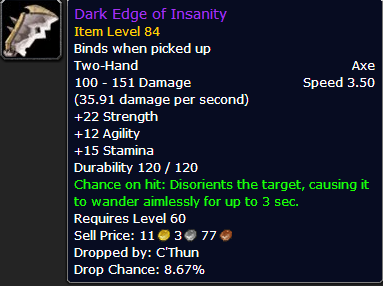 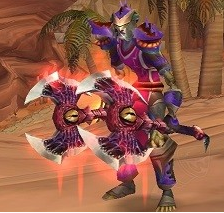 Why it's awesome: It's an axe with a super-creepy eyeball in the center of it that blinks and looks around,reminiscent of Soul Edge from the Soul Calibur games.The DEI had the highest overall DPS in the game at the time, and wound up as the third highest in vanilla, so it was fervently hoped for after every C'thun kill.

What really made this weapon memorable, though, was the Glimpse of Madness.The disorient proc makes the DEI unique in all of WoW -- no other weapon has featured such an ability. As a result, PvP'ers loved this weapon in its day, especially since the proc didn't break on damage. 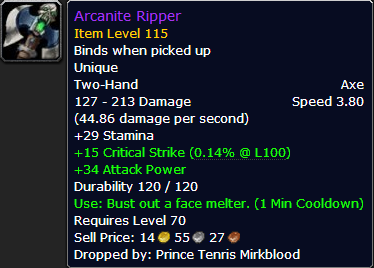 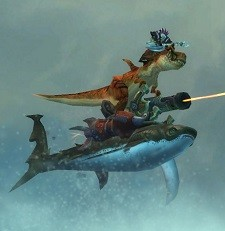 Why it's awesome: The Arcanite Ripper is a tribute to classic WoW's Arcanite Reaper axe. Since the boss was only available for a short time, and could only be killed once a week, the Arcanite Ripper is one of the rarest weapons in the game.
The Ripper has an on-use effect that transforms your character into a Forsaken that busts out a sick guitar solo, complete with fiery green explosions. Yes, wielders of the AR got green fire years before warlocks had it. 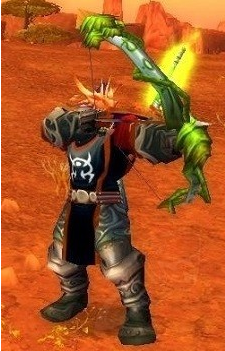 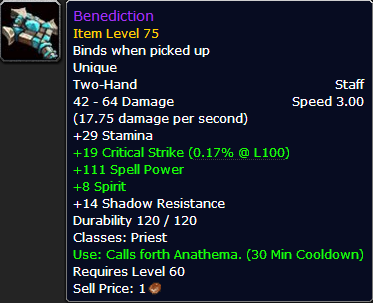 Why they're awesome: These weapons were the pinnacle for early priest and hunter raiders in vanilla WoW. The questlines were very difficult and many parts could only be completed solo. The hunter quests didn't even let you use your pet.
Wielding one of the above proved that you not only had success in raids, but that you had mastered your class as well. The models were all instantly recognizable to players around you, so you garnered respect from others on your realm just by equipping these weapons.
Both Rhok'delar and Benediction transformed into different weapons as an on-use effect. Benediction transformed into Anathema when you wanted to melt faces instead of heal. The bow Rhok'delar originally transformed into Lok'delar, a staff with nature resistance. Most hunters never bothered using the staff version, however, and the transformation created problems with enchantments.Blizzard eventually offered the bow and staff as separate weapons instead. This was more convenient but significantly less cool.

NO. 1 Corrupted Ashbringer （no longer available） 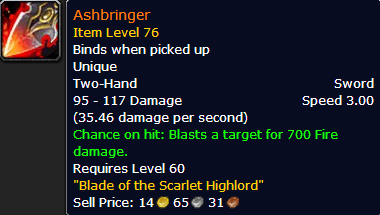 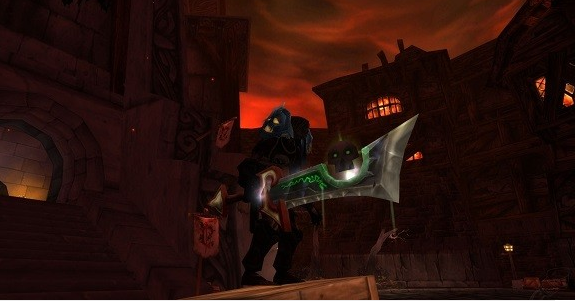 Why it's awesome:  By the looser standards of The Burning Crusade, it might have gotten the orange treatment, but vanilla was a different time. The uncorrupted version has been datamined -- and is in fact legendary -- but it has never been obtainable.
Equipping the sword changed your reputation with two factions. Not only did you become Friendly with the Scarlet Crusade, you became Hated with the Argent Dawn. You couldn't go to Light's Hope with the sword equipped. The NPCs would attack you on sight.
Finally, the sword actually changed your character's model to be a shadedarker, like a lesser version of Shadowform. With all these effects, no other weapon in the game has ever made you feel like the item actually changed your character's life the way that Corrupted Ashbringer did. Most legendary weapons haven't even come close.
As an item, the sword had a nasty life drain and a rare negative stat bonus, both for role playing purposes and to balance out its superb DPS.